Swan Lake is located on the traditional territory of the Songhees people and was an important hunting and gathering area. Over the years, a number of arrow heads and spear tips have been found in the fields and hillsides surrounding the lake, indicating a high level of hunting.  Over a hundred species of plants are known and still used by the Songhees for food, medicines and for numerous items used in food gathering and preparation, shelter and ceremony.

In 1857 the first Hudson Bay settler farmed the area raising sheep, livestock and vegetables.  Farming continued in a variety of forms around the lake and hillside through the 1930s and included a dairy farm and two wineries.  Other developments included the Swan Lake Hotel on the south side of the lake, which was built in 1864 it was reputed for excellent fishing in the spring and summer, and ice skating in the winter.  In 1894 the prosperous hotel burned to the ground but was quickly rebuilt.  It tragically burnt again in 1897 and was never rebuilt.

As the city expanded, Swan Lake went through a period that has been referred to as “rampaging cultural eutrophication” (addition of nutrients and filling in with sediments). Three “cultural” sources of nutrients were added to the inflow from the watershed – fertilizers from the Blenkinsop Valley and Swan Lake farms, effluent from a sewage treatment plant at Quadra and McKenzie which served almost 500 homes, and two wineries, which between them discharged more than 2,000 kilograms of sludge from the fermentation process into the inflow stream each year.  This span of land use and urban development resulted in Swan Lake and adjacent areas experiencing a loss of ecosystem health and services.

Development of the Sanctuary

In a progressive move, during the 1960s the Municipality of Saanich began acquiring lands around Swan Lake and Christmas Hill, with the aim of retaining the area in its natural state for the use and enjoyment of the public. Records indicate that much of the property around the lake had been purchased by 1973, for approximately $230,000!

After consultation with local naturalists, school districts, the University of Victoria and the Regional and Provincial Governments, the Municipality decided to assist with the formation of a society under the Societies Act of B.C., to develop and operate the site. It was named the “Swan Lake Christmas Hill Nature Centre Society” and was duly incorporated in June of 1975. Many of the organizations consulted along the way became members of the Board, and sent representatives to serve on the Board, making the Sanctuary truly a community effort.

A small dedicated staff was hired to begin habitat restoration and the development of a trail system.  These projects were followed by a floating boardwalk, and new office and educational facilities in the form of the Nature House (completed 1988).  Swan Lake continues to grow and steward this oasis in an urban environment, where native plants and animals flourish, and people enjoy and learn about nature and their place within it.

Swan Lake Christmas Hill Nature Sanctuary was created in many ways and in many times, beginning with the last glacial period around 15,000 years ago, through many thousand years of first nation use, followed by 165 years of agriculture, and finally culminating in the stewardship, facility development and educational activities that have taken place recently during the last 40+ years. Located near the heart of Greater Victoria, the site helps to foster stewardship of ecosystems for future generations.

Read more about the history of the Nature Sanctuary written by the first Executive Director, Terry Morrison, here:

Swan Lake Christmas Hill Nature Sanctuary From the Ground Up: A Brief Guide and History

Click Below for A Brief Guide and History of Swan Lake 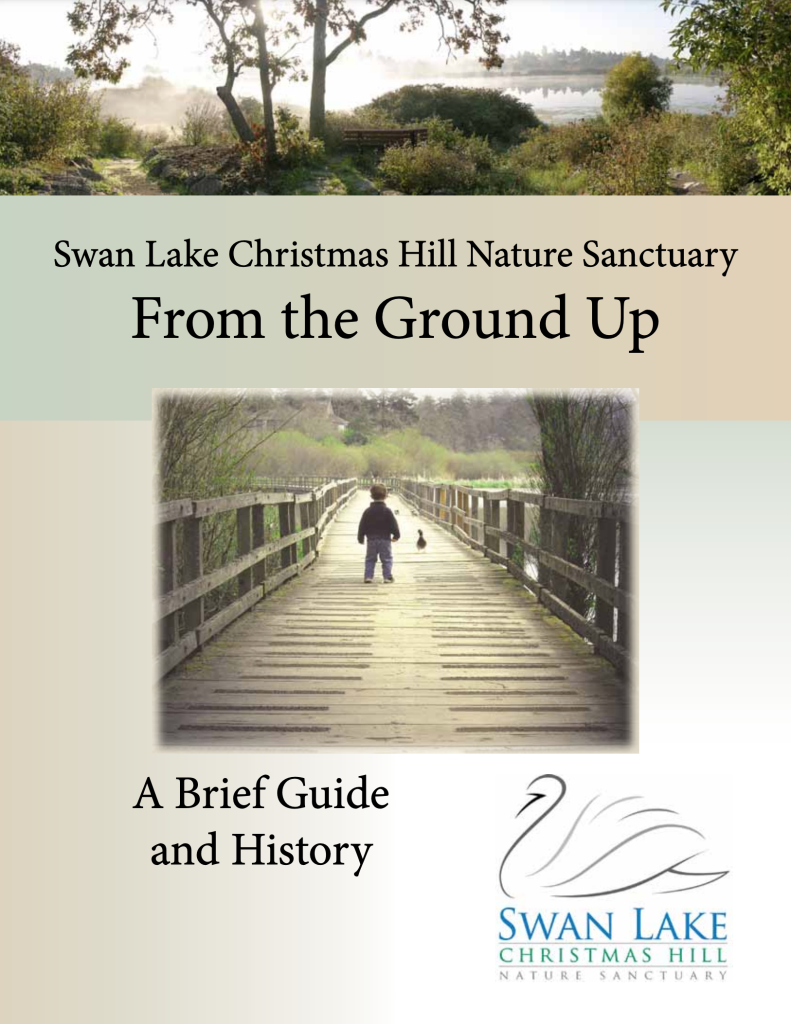